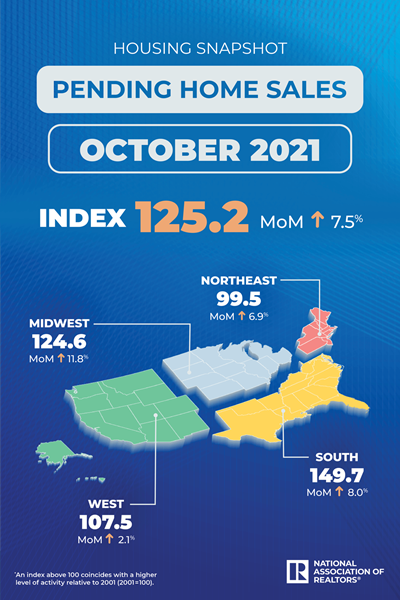 The latest Pending Home Sales Index from the National Association of Realtors (NAR)—an indicator for the housing sector, based on pending sales of existing homes in October—rebounded after a decline last month, rising 7.5% to 125.2 in October. Year-over-year, signings fell 1.4%. According to NAR, an Index reading of 100 is equal to the level of contract activity in 2001.

NAR defines a sale is listed as pending when the contract has been signed, but the transaction has not closed, though the sale usually is finalized within one or two months of signing.

“Motivated by fast-rising rents, and the anticipated increase in mortgage rates, consumers that are on strong financial footing are signing contracts to purchase a home sooner rather than later,” said Lawrence Yun, NAR’s Chief Economist. “This solid buying is a testament to demand still being relatively high, as it is occurring during a time when inventory is still markedly low.”

Despite the end of the fall/onset of winter being a generally slow time of the year for the housing market, Redfin's recent Homebuyer Demand Index (the four-week period ending November 14) reported a new all-time high since at least 2017, with the demand for homes accelerating as the number of homes listed for sale is decreasing at a slightly slower rate than in 2019 and 2020. The report found median home-sale prices rising 13% year-over-year to $357,881, up 30% from the same period in 2019, and up 2.1% from a month earlier.

While the market is expected to remain robust, Yun forecasts home prices will rise at a gentler pace over the course of the next several months and expects demand to be milder as mortgage rates increase.

“The notable gain in October assures that total existing-home sales in 2021 will exceed six million, which will shape up to be the best performance in 15 years,” noted Yun.

Regionally, contract signings rose at the strongest pace in the Midwest and South regions.

While many prospective buyers remain shut out by affordability issues and high listing prices, the rental market has surged, with CoreLogic’s latest Single-Family Rent Index (SFRI) reporting U.S. single-family rent growth increasing 10.2% in September 2021, the fastest year-over-year increase in over 16 years. The increase in rent was nearly four times the increase seen in September 2020 (2.6%) on a year-over-year basis and is running well above pre-pandemic levels when compared with 2019.

“Real estate markets have left the overheated spring 2021 behind, as an increase in the number of homeowners ready to move forward with pandemic-delayed plans boosted new listings and tamed skyrocketing price growth,” commented George Ratiu, Manager of Economic Research for Realtor.com. “However, a shortage of new and existing homes for sale continues to hamstring both first-time buyers and many homeowners struggling to find their next house. In an acknowledgment of market realities, the Federal Housing Finance Agency updated the yearly loan limits for mortgages which are eligible for backing by Freddie Mac and Fannie Mae. For most of the country, the new limit moves from $548,250 in 2021 to about $625,000 in 2022. In expensive metro areas, the maximum loan limit will move from $822,375 to under $1 million. The higher limits will give buyers who face higher-priced homes the opportunity to qualify for a conforming mortgage, which provides for lower down payments and better mortgage rates, among other benefits. However, over the longer term, housing needs a larger investment in new construction to overcome the significant supply shortage.”

Previous: FHFA Announces Deemed-Issuance Ratio for Next Year
Next: Bidding Wars Trend Down, But Remain High