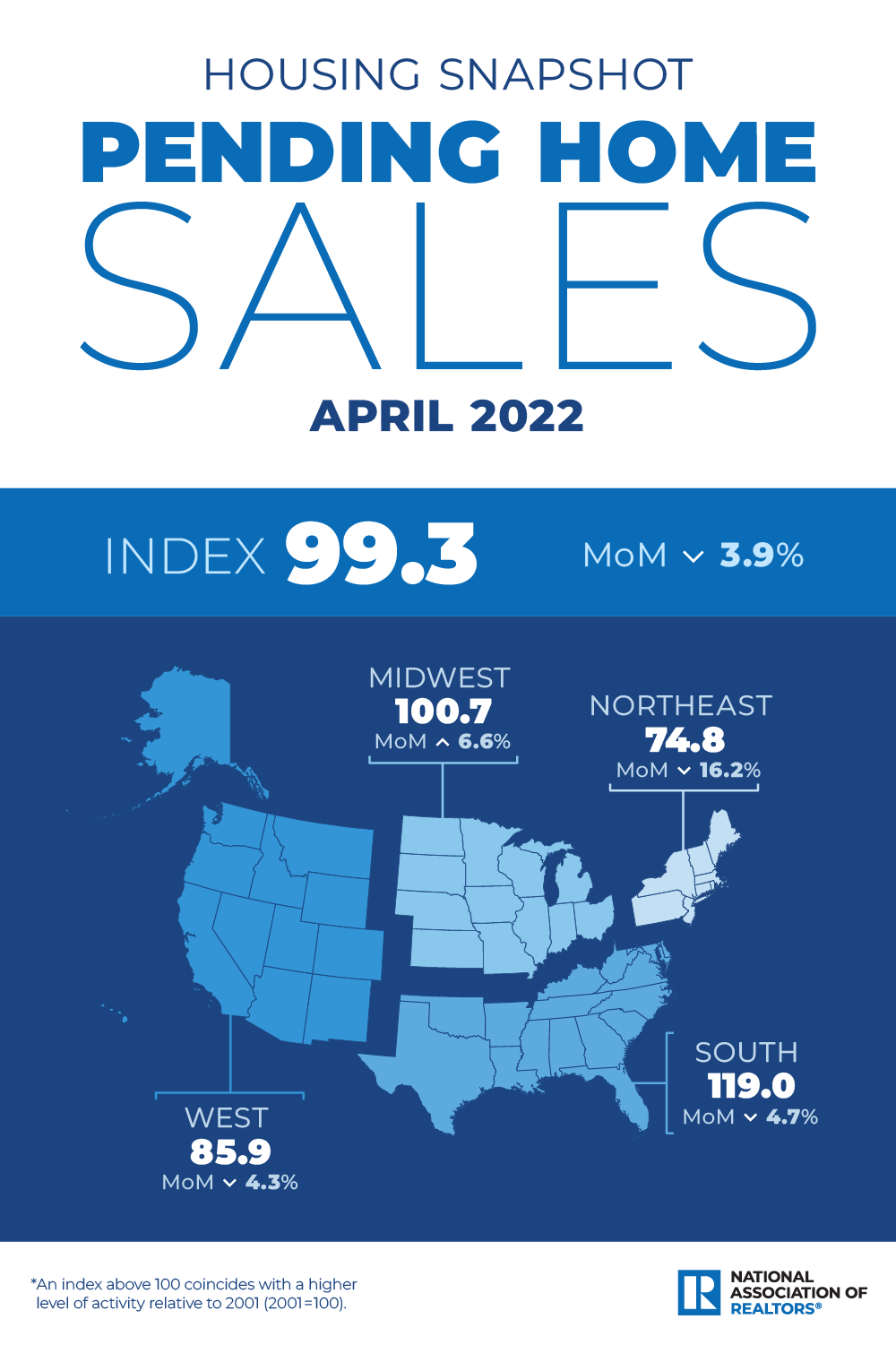 NAR’s Pending Home Sales Index (PHSI) is a forward-looking indicator of home sales based on contract signings, which slid 3.9% to 99.3 in April. Year-over-year, transactions fell 9.1%. According to NAR, an Index reading of 100 is equal to the level of contract activity in 2001.

"Pending contracts are telling, as they better reflect the timelier impact from higher mortgage rates than do closings," said Lawrence Yun, NAR's Chief Economist. "The latest contract signings mark six consecutive months of declines, and are at the slowest pace in nearly a decade."

As mortgage rates continue above the 5% mark, NAR forecasts existing-home sales to decline by 9% in 2022, and home price appreciation to moderate to 5% by the close of 2022.

"The escalating mortgage rates have bumped up the cost of purchasing a home by more than 25% from a year ago, while steeper home prices are adding another 15% to that figure,” said Yun.

As Yun describes, work-from-home scenarios have broadened the home search for many, Redfin reports that home prices in many once-affordable metros have risen to new highs, and priced out many would-be buyers. But a handful of popular migration destinations, primarily in the South, were found to be relatively affordable, as nearly 32% of homebuyers nationwide looked to move to a different metro area in April 2022, close to the all-time high of 32.3% set in Q1 of this year.

"If mortgage rates stabilize roughly at the current level of 5.3% and job gains continue, home sales could also stabilize in the coming months," Yun said. "Home sales in 2022 are expected to be down about 9%, and if mortgage rates climb to 6%, then the sales activity could fall by 15%. Home prices in the meantime appear in no danger of any meaningful decline. There is an ongoing housing shortage, and properly listed homes are still selling swiftly–generally seeing a contract signed within a month."

A new phenomenon has emerged where affordability has tied the hands of many would-be buyers, and they wind up scrapping their plans and remaining in place, rather than moving up or moving out.

George Ratiu, Senior Economist and Manager of Economic Research at Realtor.com, added to the migration issue, “Looking at the next few months, I expect that the pace of transactions will reflect the high cost of financing a home. For households seeking a reprieve from the affordability crisis, a move to a lower-cost locale may offer a solution. However, not everyone is able to relocate, especially as some companies insist on bringing workers back into offices, despite higher commuting costs and lagging wage growth.”