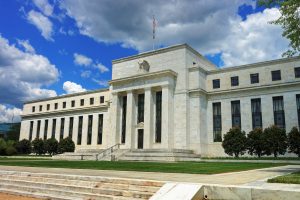 It has been 732 days since the Federal Reserve Open Market Committee (FOMC) cut interest rates in an emergency meeting in light of the then-blossoming COVID-19 pandemic. But all that changed today as the FOMC raised the nominal interest rate by 25 basis points to 0.25-0.50% after the Committee's quarterly two-day meeting.

"The Committee seeks to achieve maximum employment and inflation at the rate of 2% over the longer run. With appropriate firming in the stance of monetary policy, the Committee expects inflation to return to its 2% objective and the labor market to remain strong,” said the Committee in a prepared statement released at the conclusion of the meeting. “In support of these goals, the Committee decided to raise the target range for the federal funds rate to 0.25% to 0.50% and anticipates that ongoing increases in the target range will be appropriate. In addition, the Committee expects to begin reducing its holdings of Treasury securities and agency debt and agency mortgage-backed securities at a coming meeting.”

The growing military conflict in Ukraine is also injecting uncertainty into the market and was taken into account in this decision.

“The invasion of Ukraine by Russia is causing tremendous human and economic hardship. The implications for the U.S. economy are highly uncertain, but in the near term the invasion and related events are likely to create additional upward pressure on inflation and weigh on economic activity.”

This also marks the first time the Committee has raised rates since its meeting in December 2018 when inflation was at 2.4%, unemployment was at 3.9%, and the GDP was 2.9%. The move also mirrors a 0.25% increase by the Bank of England earlier this year.

“In assessing the appropriate stance of monetary policy, the Committee will continue to monitor the implications of incoming information for the economic outlook,” The Committee said. “The Committee would be prepared to adjust the stance of monetary policy as appropriate if risks emerge that could impede the attainment of the Committee's goals. The Committee's assessments will take into account a wide range of information, including readings on public health, labor market conditions, inflation pressures and inflation expectations, and financial and international developments.”

“The real question is what comes after,” said First American Deputy Chief Economist Odeta Kushi. “The Federal Reserve faces a unique challenge in the year ahead—tame inflation without throwing the economy into a recession. The dot plot released along with FOMC minutes on Wednesday may signal how much the Fed’s expectations around inflation, GDP, and rate hikes have shifted since December.”

“When it comes to the housing market, while changes to the Federal Funds rate may not directly impact mortgage rates, ‘quantitative un-easing’ does place upward pressure on mortgage rates,” Kushi continued. “Mortgage rates have already trended higher in recent months due to a strong economy, higher inflation expectations, and the prospect of Fed tightening.”

“One of the biggest components of both the Consumer Price Index and PCE is housing. Due to how the housing components of inflation are measured, they tend to lag the observed rental and house price increases by approximately one year. It's just beginning to show up in official estimates and will keep overall inflation elevated.”

“Mortgage rates have already been increasing for many reasons—improving economy, higher inflation expectations and Fed tightening. As rates rise, some buyers on the margin will pull back from the market and sellers will adjust price expectations, resulting in a moderation in house price appreciation.”

“The other implication of a rising mortgage rate environment is the rate lock-in effect. Many homeowners have locked into historically low rates, and are less likely to move as rates move higher—this does not bode well for housing supply.”

“With inflation concerns a pressing backdrop to the current economic climate, today’s Federal Open Market Committee heralded the first increase in the Federal Funds rate since March 2020, to a range of 0.25-0.50%,” Hale said. “The hike comes nearly two years to the day from when the Fed—in an effort to help facilitate market-functioning as the COVID-19 pandemic spread around the globe—cut rates to 0 and began its most recent purchases of Treasury and mortgage-backed securities.”

“The Fed worked to ensure today’s announcement would not be a surprise, with the rate hike following a series of foretelling decisions, including its acceleration of asset tapering in December through the end of its asset purchase program earlier this month,” Hale continued. “The Fed’s language in its public statements has also prepared markets for rate increases by consistently focusing on above-target inflation and progress against labor market goals. This also meant that mortgage rates have largely adjusted for the first hike, and I don’t expect a spike following the latest announcement.”

“Rather, as markets digest the Fed’s updated economic projections, I anticipate a continued increase in mortgage rates over the next several months consistent with today’s statement that indicated an 'appropriate firming in the stance of monetary policy,' and that 'the Committee expects to begin reducing its holdings of [assets] at a coming meeting.' Additionally, there was one dissenting vote, from James Bullard, who preferred a larger half percentage point increase. This is an indication of desire among the committee for faster policy tightening.”

“The housing market is already in a long-term supply shortage situation, as families need 5.8 million more homes than were built over the last decade,” Hale concluded. “Demand is expected to soar based solely on Americans’ shifting stage of life, with a very large cohort of young, Millennial households at key homebuying ages. Add in the challenges of declining rental affordability and competitive job markets driving higher incomes and increased workplace flexibility, and home prices are likely to keep rising. So too will the creative solutions households employ to meet the basic need for a roof over their heads."