Nationwide bankruptcy filings were about 14 percent lower in July 2016 compared with a year earlier, continuing an ongoing trend of decline, according to July 2016 AACER bankruptcy data reported by Epiq Systems.

The average number of filings per day in July 2016 was 3,065 over 20 days, which is an increase from June’s daily average of 3,014 over 22 days. The extra two filing days in June compared to July accounts for the slight increase in the number of filings in July; had July featured 22 filing days, there would have been nearly 300 fewer filings averaged per day than in June. Bankruptcy filings have averaged 3,142 for the first seven months of 2016 over a period of 146 filing days. 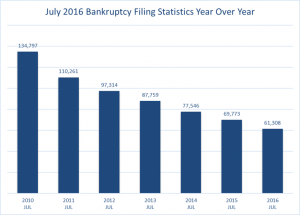 Tennessee and Alabama continued to rank first and second among states in bankruptcy filings per capita for July with 5.56 and 5.34 for every 10,000 people, respectively. Those numbers were virtually the same as June’s numbers. The national average of filings per capita in July 2016 held steady over-the-month at 2.53, though it has increased by about 50 basis points since January 2016’s average of 2.02 percent.