Home / Daily Dose / The Week Ahead: House Committee to Examine the Impact of Wildfire 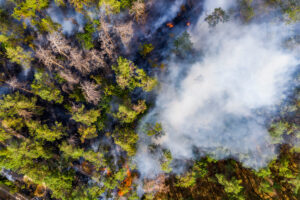 On Thursday, September 22, the House Financial Services Committee’s Subcommittee on Housing, Community Development and Insurance will host a hearing titled “State of Emergency: Examining the Impact of Growing Wildfire Risk on the Insurance Market” beginning at 9:00 a.m. EST. The panel will examine the impact that climate change, primarily wildfire, has had on the nation.

In August, Rep. Maxine Waters, Chair of the House Committee on Financial Services, announced the House passage of “The Wildfire Response and Drought Resiliency Act,” which included her bill, HR 8483, “The Wildfire Insurance Coverage Study Act of 2022.” HR 8483 requires the Federal Emergency Management Agency (FEMA) and the Government Accountability Office (GAO) to conduct studies assessing the danger that wildfires increasingly pose to communities and how the market for homeowners’ insurance is responding to this growing threat.

“I am so pleased that my bill was included in the Wildfire Response and Drought Resiliency Act,” said Rep. Waters recognizing the need for homeowner protections. “As the effects of climate change continue to worsen, especially in my home state of California, where whole communities have been devastated by wildfires, we need to better understand how to prepare and protect families and their homes against this growing risk. I urge my colleagues in the Senate to get this bill to the President’s desk so we can ensure families have the protection they need.”

Over the past decade, CoreLogic found that wildfires burned an average of 6.8 million acres annually, with that number topping 10 million acres in three of those years. CoreLogic’s recent Wildfire Report for 2022, examined property-related wildfire risk alongside reconstruction resource availability, temporary housing capacity for displaced individuals, and community economic recovery potential among fire-prone regions.

While wildfires most commonly impact the Western portion of the U.S., climate change and the region’s severe drought of recent years has only intensified instances of wildfire. Decreasing water levels in the Colorado River and Lake Mead, along with declines in snowpacks, have contributed to a longer wildfire season by an average of three months, resulting in a 1500% increase in burn areas, according to CoreLogic.

“The areas that are already built are at lower risk of wildfire because they’re not surrounded by forest and trees—they’re surrounded by other buildings,” said Dr. Jenny Schuetz, Senior Fellow at Brookings Metro. “But increasingly, we have to build new housing farther and farther out from downtown areas because the easy-to-use land has been built out and it’s often difficult to add more housing in the urban core. … In the West, the wildfire-prone areas are in the undeveloped lands, and so the farther we push toward the undeveloped lands, the more houses are going to be at risk.”