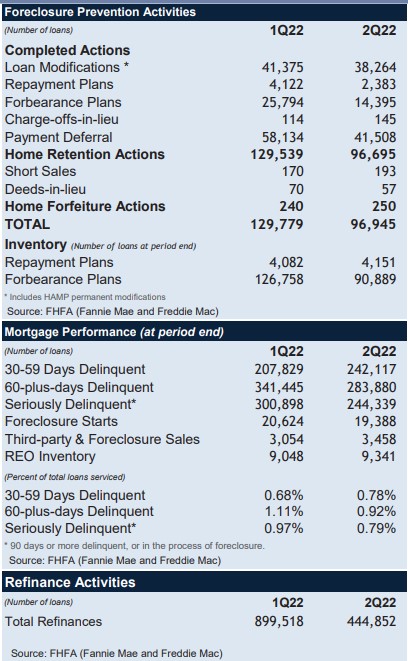 The Federal Housing Finance Agency (FHFA) has announced that its 2022 Foreclosure Prevention and Refinance Report found that Fannie Mae and Freddie Mac (the GSEs) successfully diverted 96,945 homeowners from foreclosure during the second quarter, raising the number of homeowners it has helped since they entered into conservatorship in 2008 to 6.59 million.

Of these actions, 5.88 million have helped troubled homeowners stay in their homes; this number includes 2.58 million permanent loan modifications.

In addition, even in light of rising mortgage rates, 72% of loan modifications during the second quarter still reduced borrowers’ monthly payments by at least 20%. The number of refinances decreased from 899,518 in the first quarter to 444,852 in the second quarter.

All-in-all, through various channels the GSEs serious delinquency rate declined from 0.97% to 0.79% through the end of the second quarter. Comparatively, the FHA loans had a delinquency rate of 4.64%, Veteran Affairs loans were 2.83%, and all loans clocked in at 2.12%

GSE foreclosure starts declined 6% to 19,388, while third-party foreclosure sales increased 3% to 3,485 in the second quarter.

Other highlights from the report include: 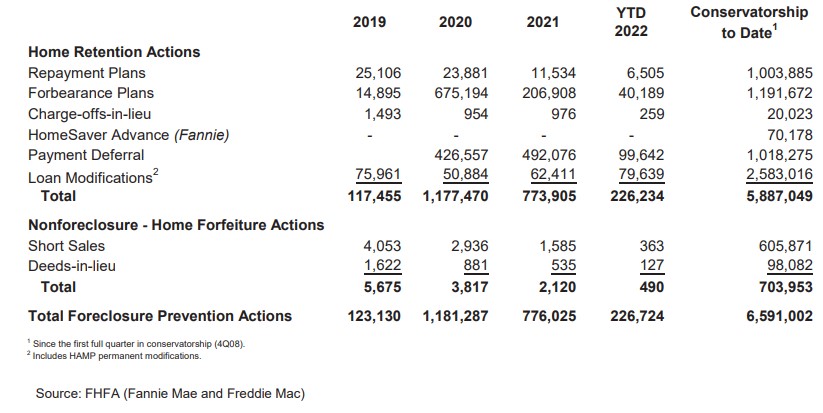