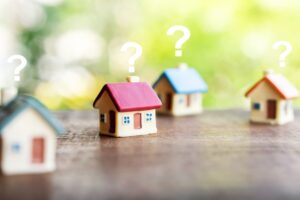 ATTOM has issued a Special Housing Risk Report spotlighting county-level housing markets around the nation that are more or less vulnerable to declines, based on home affordability, foreclosures, and other measures in Q3 of 2022.

ATTOM’s report shows that New Jersey, Illinois, Delaware, and inland California continued to have the highest concentrations of the most-at-risk markets in the country, with the biggest clusters in the New York City, Chicago, and Philadelphia areas. Southern and Midwestern states remaining less exposed.

Q3 patterns—based on gaps in home affordability, underwater mortgages, foreclosures, and unemployment—revealed that New Jersey, Illinois, and California had 28 of the 50 counties most vulnerable to potential declines. That was roughly the same as the 27 more-at-risk markets that were in those states in Q2 of 2022. During a time when the broader market boom slowed considerably, those concentrations still dwarfed other parts of the country.

The 50 most at-risk included eight in and around New York City, seven in the Chicago metropolitan area, four in or near Philadelphia and nine spread through northern, central, and southern California. The rest were clustered mainly in other parts of the East Coast, including all three counties in Delaware.

"As the prospect of a possible recession hangs over the U.S. economy, counties in three of the seven largest metropolitan areas–New York City, Chicago, and Philadelphia–are among the most vulnerable to a potential downturn in their housing markets," said Rick Sharga, EVP of Market Intelligence at ATTOM. "These counties, and many more in Central California share a number of traits–poor affordability, relatively high unemployment and foreclosure rates, and homeowners who are underwater on their loans–which could spell trouble if the economy takes a turn for the worse."

At the other end of the risk spectrum, the South, Midwest, and Western areas outside California had the highest concentration of markets considered least vulnerable to falling housing markets.

Counties were considered more or less at-risk based on the percentage of homes facing possible foreclosure, mortgage balances that exceeded estimated property values, the percentage of average local wages required to pay for major home ownership expenses on median-priced single-family homes, and local unemployment rates. The conclusions were drawn from an analysis of the most recent home affordability, equity and foreclosure reports prepared by ATTOM.

The ongoing wide disparities in risk throughout the country remained in place at a time when the overall U.S. housing market had one of its weakest third-quarter performance in the past decade. Key measures for the period running from July through September of 2022 showed the national median home value decreasing 3%, home-seller profits declining, foreclosures doubling, compared to the same period in 2021, and mortgage lending plummeting to its lowest level in three years.

All of that happened as the 30-year fixed-rate mortgage (FRM) climbed close to 7%, inflation remained at a 40-year high, and the stock market fell. Each of those forces cut into what home buyers could afford.

ATTOM’s analysis found that 28 of the 50 U.S. counties considered most vulnerable in Q3 of 2022 to housing market troubles (from among 581 counties with enough data to be included in the report) were in the metropolitan areas around Chicago; New York, New York; and Philadelphia, as well as in California. California markets on the list remained mostly inland, away from the coast.

The 50 most at-risk counties included three in New York City (Kings, New York, and Richmond counties, which cover Brooklyn, Manhattan, and Staten Island), five in the New York City suburbs (Essex, Passaic, Sussex, and Union counties in New Jersey and Rockland County in New York) and seven in the Chicago metropolitan area (Cook, De Kalb, Kane, Kendall, Lake, McHenry, and Will counties, all in Illinois). The four in the Philadelphia metro area that were among the top 50 in the third quarter were Philadelphia County; Gloucester County, New Jersey; New Castle County, Delaware; and Cecil County, Maryland.

Major home ownership costs (mortgage payments, property taxes and insurance) on median-priced single-family homes consumed more than one-third of average local wages in 33 of the 50 counties that were most vulnerable to market problems in Q3 of 2022. The highest percentages in those markets were in:

More than one of every 1,000 residential properties faced a foreclosure action in Q3 of 2022 in 45 of the 50 most at-risk counties. Nationwide, one in 1,517 homes were in that position. (Foreclosure actions have risen since the expiration in July 2021 of a federal moratorium on lenders taking back properties from homeowners who fell behind on their mortgages during the early part of the Coronavirus pandemic that hit in 2020. Roughly twice as many foreclosure cases were open in the third quarter of 2022 compared to same period in 2021.) The highest foreclosure rates in the top 50 counties were in:

Click here for more on ATTOM’s study of the nation’s most vulnerable regions.

Previous: Florida Appellate Court Enforces Rules on Mediated Settlement Agreements
Next: Plan & Prevail: How the Industry Can Prepare for an Uncertain Future