Housing permits surged another 4.5 percent in March to a seasonally adjusted annual rate of 747,000, the highest level since September 2008, the Census Bureau and Department of Housing and Urban Development reported jointly Tuesday. At the same time though, housing starts fell for the third time in the last four months to the lowest level since last October. The increase in permits was driven largely by multi-family activity; single family permits fell for the first time since last September.

END_OF_DOCUMENT_TOKEN_TO_BE_REPLACED

Spring Outlook: Reports From the Field Suggest Better Days Ahead

Despite the fact that key market indicators released in recent weeks have shown declines in home sales, anecdotal reports from real estate agents in the field suggest better days are ahead for the industry, according to commentary released Monday by the economic team at Wells Fargo Securities. Most agents are reporting ""significant gains in buyer interest and sales,"" and as a result, Wells' economists have nudged their forecast for home sales slightly higher. They are expecting sales of existing homes to top out at 4.50 million in 2012 and rise to 4.65 million in 2013.

END_OF_DOCUMENT_TOKEN_TO_BE_REPLACED

Home prices in many areas are already rebounding from the bottom of the market, according to the March HomeValueForecast.com update from Pro Teck Valuation Services. This month, the company explores the turnover rate, which is the number of non-distressed sales divided by the total housing stock in a particular market. Pro Teck says this calculation is one of the most powerful and, yet, simplest leading indicators of the future direction of home prices, with the turnover rate hitting bottom six to 18 months before the bottom in home prices.

END_OF_DOCUMENT_TOKEN_TO_BE_REPLACED

CoreLogic: Number of Completed Foreclosures Down for February 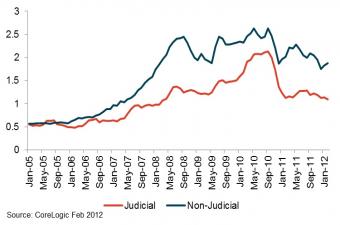 END_OF_DOCUMENT_TOKEN_TO_BE_REPLACED

The Urban Land Institute released its Real Estate Consensus Forecast Wednesday morning, and overall, the 38 real estate economists and analysts surveyed project broad improvements for the economy. With signs of improvement in the housing sector already emerging, participants expect to see housing starts nearly double by 2014, and project home prices will begin to rise in 2013. The average home price, which has declined somewhere between 1.8 percent and 4.1 percent over each of the past three years, according to FHFA data, is expected to stabilize in 2012, followed by a 2 percent increase in 2013, and a 3.5 percent increase in 2014.

END_OF_DOCUMENT_TOKEN_TO_BE_REPLACED

Housing starts fell 1.1 percent in February to 698,000, compared with market expectations for a smaller decline, the Census Bureau and Department of Housing and Urban Development reported jointly Tuesday. Single family starts plunged 9.9 percent to 457,000, the steepest decline in a year.

END_OF_DOCUMENT_TOKEN_TO_BE_REPLACED

While homes prices continue to be on the decline, rent prices are actually on the rise and showed a 3 percent increase from January 2011 to January 2012, as opposed to home values, which dropped 4.6 percent during that same period, according to the January Zillow Real Estate Market Reports. Zillow data also showed year-over-year gains for 69.2 percent of metropolitan areas covered by the index while only 7.3 percent of metros saw increases in home values. Based on the Zillow Rent Index, the states with the greatest increases in median rent over a year were New Jersey (+16.5), New York (+13.7), Kansas (+10.2), Indiana (+10), and Michigan (+10.0).

END_OF_DOCUMENT_TOKEN_TO_BE_REPLACED

The pending home sales index (PHSI) rose in January to 97.0 from a downwardly revised 95.1 in December. At 97.0, the index is at its highest level since April 2011, the National Association of Realtors reported Monday. The index rose for the third time in the last four months and the January reading was 8 percent above January 2011 levels, but 26.5 percent below the April 2005 peak. The index began in January 2005. The PHSI has been trending upward, albeit modestly for most of the past two years. Despite the 20-month high, the index is relatively subdued.